Best Way To Get Started In Real Estate Investing

This talk about the three different ways to invest in real estate and how I recommend to start. 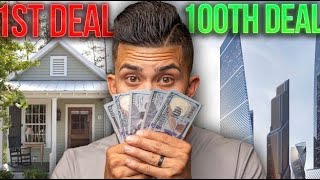 New real estate investors typically fall into three different categories. The first type is those who are brand new to real estate investing and they know absolutely nothing. The second type is the people who have been watching YouTube videos or gone to some events yet still have not bought a house or taken action. The third type is the person who has maybe bought their first property, or maybe a couple of properties, but they don't know how to take it to the next level. If you fit in any of those categories, this is for you.

Let's talk about the different strategies. When it comes to real estate investing, there are three main things that people do.

Most people understand what rental properties are. You're simply going to buy a house and rent it out to somebody else. The goal for most property owners is that the tenant ends up paying enough rent to cover their mortgage and potentially make some cash flow. And in turn, if you buy enough of them, you can create enough passive income that could cover the lifestyle of your dreams. So rental properties are great for that aspect.

The second one I mentioned is flipping houses. Now, if you're watching this video, you've probably seen the HGTV show. You buy a beat-up, fixer-upper you get it fixed up, and then you go and sell it for a profit. Now, even though they make it seem quick and easy on TV, there's a lot that goes into it. You have to figure out how to find the deal. You gotta figure out how to finance it. Then you got to figure out how to fix it up. But if you do all three of those things, you can make a lot of money. Whereas rental properties are not going to really make you much money at all. Today. Those are more of a long-term play where you're going to be just getting a small monthly check. So flips are great for quick money.

But the third way to invest is through what's called wholesaling. And wholesaling is like flipping without having to actually buy the house or fix it up. All you have to do is find a really good deal and then sell the contract to another flipper or somebody who wants rental properties. And what you're able to sell the contract for is what's called a wholesale fee. And to give an easy example, let's say that you put a house under contract for $200,000 and you know that I would buy it for $220,000 because even at $220,000, I know that I can fix it up and sell it for over 300,000. And I'm going to make a really good profit doing it. But you, as the wholesaler, would have made $20,000 in that scenario.

I love the wholesaling strategy and it's usually what a lot of beginners are attracted to when they hear about it and it's easy to see why. You can make quick money today by just finding a really good deal. You don't have the risk of having to buy it and fix it up and get it sold hopefully months down the road. But I would actually disagree that you should just choose that right out the gate because you're new. I'm actually a big believer in learning to flip houses first and foremost. The reason is by learning to flip houses, you're able to do anything in real estate investing.

Well, if you've already learned how to flip houses, that's the same skill set for rentals. The only difference is instead of selling it for a quick profit, you're keeping it as a long-term cashflow play. So that's why I think that people should learn how to flip houses from the beginning because it opens the doors for everything else. I see a lot of people who try to get started in wholesaling and they have success, but then they never progress past that. They never flip houses. They never buy rentals because they never learned how to do the other two aspects. They still can't raise money and they still can't manage construction.

It also gives you the ability to buy from other wholesalers. I have great relationships with wholesalers because we have bought so many deals from them over the years. But I always say if they were able to actually flip themselves, they would probably double or triple their revenue every year. Because by definition, they have to leave meat on the bone in order for someone else to buy it. So to be clear, I don't have a problem with wholesaling. We still do it. We buy from wholesalers, but if you want to be a complete investor and you want a quicker path to your first couple of deals, I think it's actually easier to flip because you don't have to get as good of a deal.

There's one other aspect to think about when you're just getting started, and that is thinking both short-term and long-term. I believe when you're starting out, you should be thinking about how to make money in the short term, essentially, “How do I flip and how do I wholesale as many houses as possible so that I can build up my cash.” This was my strategy starting out because I didn't have much money. I could not afford to tie up my money in rental properties because I needed that money to do my next deal. If you saved up $20,000, that you could either put into a flip or put into a rental, I would say, put it in the flip 100% of the time. It probably took you a long time to save up that $20,000.

The moment you go and throw it into a rental you're out of cash. Then you're trying to save up to do another deal. Whereas if you put it in the flip and you potentially made another $20,000 or another $30,000 now you've got a lot of cash to work with that you could then use to flip some more, or maybe spend some money on marketing to get more deals. The point is when you're just getting started out as a beginner cash is the most valuable resource you can have. So you don't want to put it in things where it gets stuck.

When I first got started with flipping houses, I did not buy a rental property for at least my first 50 deals because I was so focused on reinvesting my money into more and more flips because I wanted to build up my cash position.

Now here's the deal. You shouldn't always just be thinking of the short term. Once you start building up your cash and getting experience, you then want to transition to thinking about the long term. “How do I start keeping some of these properties as rentals? How do I start building up my cash flow and passive income? How do I keep these rentals to get tax deductions and appreciation?” That stuff becomes important.

Now I do have one exception to this rule. If you have a high-paying job, that's making you multiple hundreds of thousands of dollars every year, you don't necessarily have to flip or wholesale. You could have enough active income from that job and start buying rental properties immediately. But if you're like me and you didn't have a high-paying job and you didn't have a career, then I want you to start off with flipping or wholesale because building up your cash in an active income is more important.

You can build long-term wealth down the road.