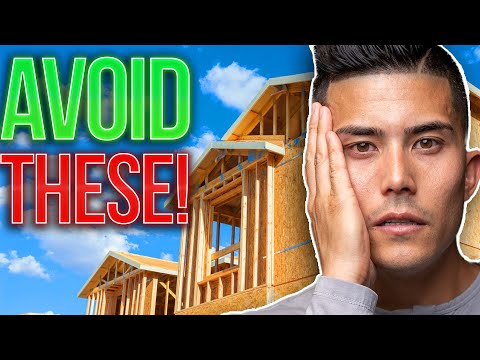 We are going to be talking about these top five mistakes that new real estate investors make.

One thing I always teach my students is that you've got to make a ton of offers every single day in order to be successful. But in order to make those offers, you've got to first generate the leads. Now, obviously with real estate investing and trying to buy houses. You're trying to generate leads for off market properties or potentially MLS properties or potentially wholesalers and realtors. This is how you're going to create all the opportunities. Then you just have to go and make offers on those opportunities. But the reality is most people don't generate enough leads or make enough offers. Even if we get somebody who's able to generate a lot of leads, they don't make nearly enough offers on those leads to capitalize on them the right way. If somebody is talking to you, you might as well make an offer. You have nothing to lose by doing it other than potentially being embarrassed by making a low offer.

I'm going to shoot my shot. And that's exactly what you need to do as a real estate investor, make a ton of offers and who cares what other people think. If you're worried about generating leads, you can do something as simple as making offers on all the properties on the market. Let's just say your market has a thousand listings. I can promise you if you make an offer on every single listing at a low price, one of them will take it. The reason I know that is because we still get deals on the MLS by using that approach. I think it was Wayne Gretzky that said you miss a hundred percent of the shots that you don't take. So go take your shot.

Now, usually where I see speculating is with the ARV. If you don't know what ARV is, it stands for After Repair Value. Essentially all that is, is what we think we're going to sell the property for once it's fixed up and on the market. Now, anytime we go to flip a house, we have to calculate that ARV and make sure we're confident we're going to sell it for that. If I think that I'm going to sell a house for $400,000 and I sell it for only $350,000, I'm probably going to lose a lot of money. So I always teach new investors to be conservative with their ARVs. Now, a big problem right now in today's market is that it's easy to get very optimistic on ARVs. A lot of houses that I thought I was going to sell for say $400,000 are now selling for $450,000. It's easy to get into bad habits and say, “this property is only worth $400,000 today, but I bet you, by the time I go to sell it, I'm going to get $430,000 or $450,000”

You cannot speculate like that. The deal has to make sense for you at $400,000. If it does more than that, great. You've hit a home run. It's going to be an awesome flip, but you cannot bank on it selling for $430,000 0r $450,000 in order for you to make the minimum profit. That's going to get you into trouble. you're going to lose a lot of money using that approach. The reason I know this is because I have speculated on properties many times in my career, some have worked out for me and I made money, but I've also lost hundreds of thousands of dollars by doing it. So don't speculate, just work harder on finding good deals that you know, for sure are going to make money. If it does get the appreciation and it does better than you think that's great, but we never want to bank on that.

Most new investors screw up the entire portion of what it takes to renovate a house. The very first thing would be estimating your rehab costs. Now, if you've watched some of my other videos, I actually talk about how we estimate costs. We use something called the price per square foot method. To give you a quick example, in Las Vegas, we know that we can spend about $25 a square foot to do a full renovation. So if the house is 2000 square feet, we're pretty certain that we're going to spend around $50,000 to renovate it.

That's just Las Vegas, and the pricing that we have with our contractors. Your price per square foot is going to be different in California or New York or the Midwest. Also, this doesn't take into account a rehab on a house that's down to the studs and needs new electrical and all these things. Here's the thing you got to know about using that method. It is simply just an estimate. It's a way for you to evaluate a lot of deals all at once from your computer.

If you are close on a deal and you're potentially going to buy it, or you're under contract, you're going to want to go get a full bid from a contractor. You're going to want to walk it with them, make sure you get an inspection and make sure your numbers are for sure, because what you see in pictures and what you might estimate using that method might not be actually what happens when you're in person. We've seen that happen a lot. We'll make our offers based on what we think it's going to cost, but then we will adjust it during our due diligence period. When we figure out that, “Hey, this thing is in worse shape than we thought, or maybe we found some other problems that we couldn't see in the pictures.” So the renovation process starts from the very beginning before you ever buy the home.

So most new investors screw up that part, but then they also screw up the second part of that, which is the project management side. So let's say you bought the property and you got the bid from your contractor and everything checks out numbers wise, but you can still get into trouble if you don't manage the project. Maybe your contractor is slacking and he's way behind schedule. Maybe he's doing a lot of unnecessary change orders and pushing the budget even higher. Maybe you gave him too much money up front and now they left the job and you got to pick up the pieces. I've seen all of those scenarios happen with bad project management. So the key is if you are going to flip a house and you are going to manage the project, make sure you're there onsite all the time, checking it out.

Also make sure you're not paying the contractor too much upfront. Lastly, like I mentioned at the beginning, make sure you're getting a bid before you ever buy it. All of those things will prevent you from making mistakes during the renovation process.

I would say, this is probably the biggest mistake I see people make. Technically it doesn't cost you anything at least financially, but what it does cost you is time and opportunity costs all that time that you spend analyzing, trying to learn every little detail and not taking action is money that you could have made today. The most valuable resource we have in this world is time. It's not money. It's not anything else. How much time we have is limited and you gotta make the most of it.

So if you're one of these new investors, who's been watching my YouTube channel for say a year now, and you haven't taken action. You haven't done a deal yet. You talk about it. You need to either quit watching my channel or join my coaching program or start doing some deals. There can be no in between where you continue to just watch and be entertained. So do not fall victim to doing this paralysis by analysis. It's really weird because I come across people all the time who have a lot of knowledge about real estate investing and their knowledge far exceeds what they've actually done. I would much rather have the person who doesn't know that much, but taking action and making things happen. Here's the truth about real estate investing. You're going to learn far more, actually doing it and making mistakes on a project than you will learning about mistakes.

I can tell you firsthand, I've made mistakes that have cost me millions of dollars, but guess what? I was able to learn from those mistakes, turn them into a positive and then make millions of dollars. I would have never been able to do what I did unless I actually made those mistakes and took action. So do not fear failure. Don't feel like you got to learn everything before you actually buy a house or take action. You're going to fail and you don't know everything. You'll never be ready, but that's the beauty of this business in any business. Even with me today, as I start new businesses, I jump into new things that I'm unsure about. I don't have all the answers when I jump into it, but I know that by being in it, I'm going to end up making a mistake.

I'm going to learn from it and then I'll have the answer. That's just all part of the process of becoming a new investor. So get out of that stage and start taking action.

This is very common because as you go through the process of finding a deal and renovating it, you're getting really excited about it. You think it is the best flip ever, and that your house is better than all the other houses that have sold to this point. So you decide to list it for more than anything else that's ever been sold. This is a mistake. Now, granted in today's market, you might be able to get away with it because there's nothing for sale, but in a normal market, over pricing, a property can kill you.

The reason is people aren't going to either see it because it's out of their search criteria or they're going to think it's not going to appraise. So making an offer on it isn’t even worth their time. Or they just flat out think it's over priced because they saw a very similar one sell for less. So you don't want to make the mistake of overpricing your properties in normal markets. Now, as I said, the caveat is we are not in a normal market right now. So over pricing could actually work, but in most situations, that's not something you want to do, but the same thing can happen with under pricing a home.

Let's just say that you should have priced it at $300,000, but you only did $290,000. Then all of a sudden you get an offer on the first day for $290,000 that you take. Well you just left $10,000 on the table, because somebody was probably going to pay you $300,000 if you priced it at that or if you waited longer. A lot of new investors want to take the very first offer that's presented to them because they're really excited. You shouldn't do that. You should wait to get the amount that you want.

We always price our properties at what we want to sell them for, and we will wait until we get that offer. Typically what can happen is we'll end up getting multiple offers because we wait and then people start a bidding war. Then we get more than we asked for. So the keys with this are to price it right from the beginning and also be patient before taking an offer, doing that alone could make you tens of thousands of dollars.